This glossary introduces the major technical terms used in the openEO project.

The terms process and process graph have specific meanings in the openEO API specification.

A process is an operation provided by the back end that performs a specific task on a set of parameters and returns a result. An example is computing a statistical operation, such as mean or median, on selected EO data. A process is similar to a function or method in programming languages.

In our domain, different terms are used to describe EO data(sets). Within openEO, a granule (sometimes also called item or asset in the specification) typically refers to a limited area and a single overpass leading to a very short observation period (seconds) or a temporal aggregation of such data (e.g. for 16-day MODIS composites). A collection is a sequence of granules sharing the same product specification. It typically corresponds to the series of products derived from data acquired by a sensor on board a satellite and having the same mode of operation.

In openEO, a back-end offers a set of collections to be processed. All collections can be requested using a client and are described using the STAC (SpatioTemporal Asset Catalog) metadata specification (opens new window) as STAC collections. A user can load (a subset of) a collection using a special process, which returns a (spatial) data cube. All further processing is then applied to the data cube on the back-end.

The figure below shows the data of a four-dimensional (8 x 8 x 2 x 2) raster data cube, with dimension names and values: 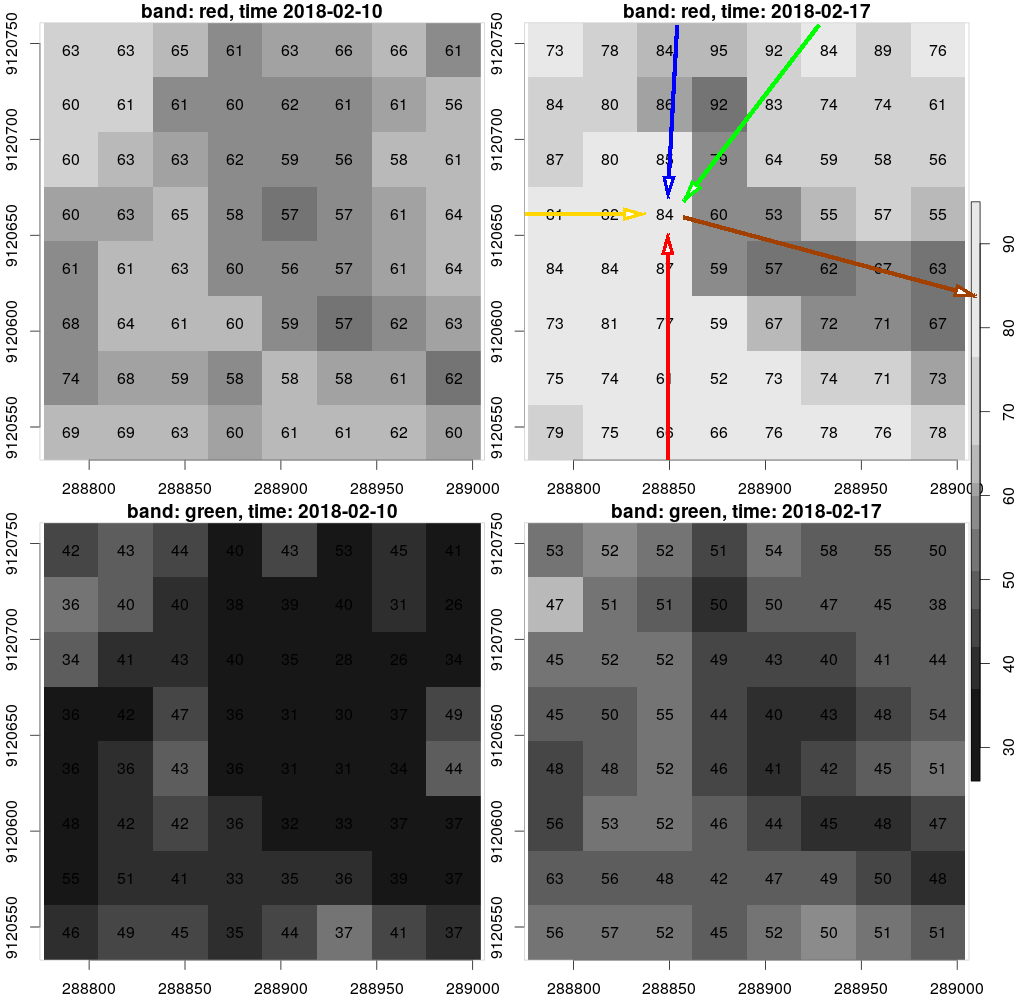 If the data concerns grayscale imagery, we could call this single value a pixel value. One should keep in mind that it is never a tuple of, say, {red, green, blue} values. "Cell value of a single raster layer" would be a better analogy; data cube cell value may be a good compromise.

A data cube stores some additional properties per dimension such as:

Having these properties available allows to easily resample from one data cube to another for example.

# apply: processes that do not change dimensions

Math process that does not reduce or change anything to the array dimensions. The process apply can be used to apply unary functions such as abs or sqrt to all values in a data cube.

The process apply_dimension applies (maps) an n-ary function to a particular dimension. An example along the time dimension is to apply a moving average filter to implement temporal smoothing. An example of apply_dimension to the spatial dimensions is to do a historgram stretch for every spatial (grayscale) image of an image time series.

The filter process makes a cube smaller by selecting specific value ranges for a particular dimension.

Aggregation computes new values from sets of values that are uniquely assigned to groups. It involves a grouping predicate (e.g. monthly, 100 m x 100 m grid cells, or a set of non-overlapping spatial polygons), and an reducer (e.g., mean) that computes one or more new values from the original ones.

Resampling considers the case where we have data at one resolution and coordinate reference system, and need values at another. In case we have values at a 100 m x 100 m grid and need values at a 10 m x 10 m grid, the original values will be reused many times, and may be simply assigned to the nearest high resolution grid cells (nearest neighbor method), or may be interpolated using various methods (e.g. by bilinear interpolation). This is often called upsampling or upscaling.

Resampling from finer to coarser grid is a special case of aggregation often called downsampling or downscaling.

When the target grid or time series has a lower resolution (larger grid cells) or lower frequency (longer time intervals) than the source grid, aggregation might be used for resampling. For example, if the resolutions are similar, (e.g. the source collection provides 10 day intervals and the target needs values for 16 day intervals), then some form of interpolation may be more appropriate than aggregation as defined here.

The abbreviation UDF stands for user-defined function. With this concept, users are able to upload custom code and have it executed e.g. for every pixel of a scene, or applied to a particular dimension or set of dimensions, allowing custom server-side calculations. See the section on UDFs for more information.

Process graphs can be processed in three different ways: